A meal in a bowl, Rice, Yellow Cucumber cooked in coconut milk, Dry Thai egg-plant curry, a salad of carrot ribbons, chicken drumsticks baked and cooked in a gravy with Srilankan spices.

Scroll down should you wish to avoid thoughts and life of Mama to the terrible four or you can read on.

He:”is there something I can do for you, tell me, you’re tired no?”

There has to be a rule understood by moms and tweens that say”thou shall not be too, too kind to your mom”, I can handle stubborn, I can handle the need to talk back but extra kindness, no.

Not saying they’re not but when one particular child of mine who is ever the troublemaker and is good at causing chaos just because he’s bored does a three sixty about turn, there’s need for concern. Now don’t think bad of me but I do get suspicious when the older kids are, kind.

When dad’s not around, I’m the boss around here.*hehehe*(not done that for a long time, feels good).

I’m the parent who’s in charge of saying,”NO”frequently, I’ve been called”mean”,”not fair”among other names and it’s no fun especially when funny guy gets to be the”best dad”by saying yes.

I think terrible No2 has been studying me, he(14) was creating an environment, tirelessly, everyday breaking down one”no”wall at a time(he started a week ago)with all his über kindness and generosity. To be fair on him, for all his need to cause trouble, he’s always been the one to take any extra load of chores from the others.

But I didn’t realize the end game until a few days ago, the boy was patient and to start with me that early, he’s got to have a few hints on how my mind works. I’ve never played chess but I think keeping up with a teen’s thought process might be like the game itself, I don’t know, is it ?

The reason for the one week of prep was the new-found joys of teenage parties and hanging out at malls with friends, that’s all I’m allowed to write but if you can, imagine the show down after I agreed to let him go, please do while keeping in mind that in this home everything happens in three’s(for now). Imagine the chaos of what one consent can bring about with terrible No1 and 2, enough said, Someone please slash the car tires please…

As I type these words, she’s(4)singing a few inches away from me and I’m worried, 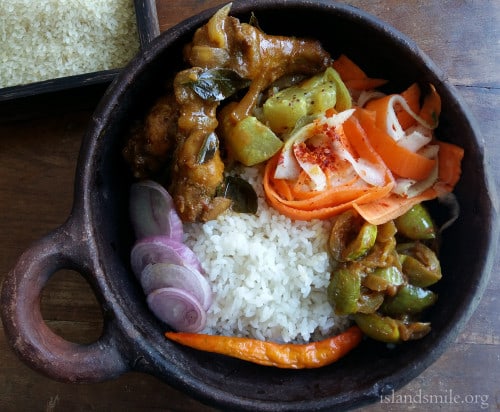 So he says”You’re giving me rice in a broken pot, I can’t eat in this Mama, its broken, where’s the other handle”

After a few more minutes of grumbling and refusing to eat, me convincing him to try, I turn my back on him to serve the others, five minutes later, I look back at him and ask,”how is it?”

With a mouthful of rice and a ribbon of Carrot hanging out, a drumstick just about to join in, he gives me a grin.

Yeah, that’s what I thought, memories made, point proven, between a pot that’s cooked many curries and a plain plate, I’ll choose the pot anytime.

One of those days where I forgot to take the step by step images.

Starting with a bowl of rice, find recipe here.

Next would be a Yellow cucumber(kakiri)cooked in Coconut milk. Recipe link to follow.

As curry I’ve included drumsticks that were marinated for twenty-four hours, baked and then cooked for a few minutes in a gravy made up of Srilankan spices.

Feel free to add your own meat curry for now as this recipe needs to be slightly tweaked before joining the blog.

As a Salad, I’ve added Carrots cut into ribbons then seasoned with a pinch of salt, chilli flecks, 2-3 tablespoons of Vinegar and 1-2 tablespoons of Sugar. the vinegar slightly softens the carrots, this is a great favorite with the kids, most times, there is nothing left for me as they love this.

Stay tuned for another meal in a bowl. 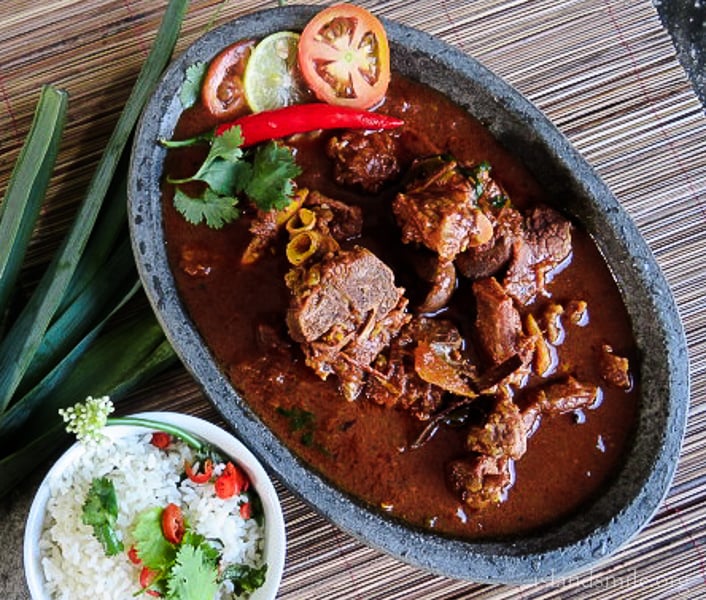 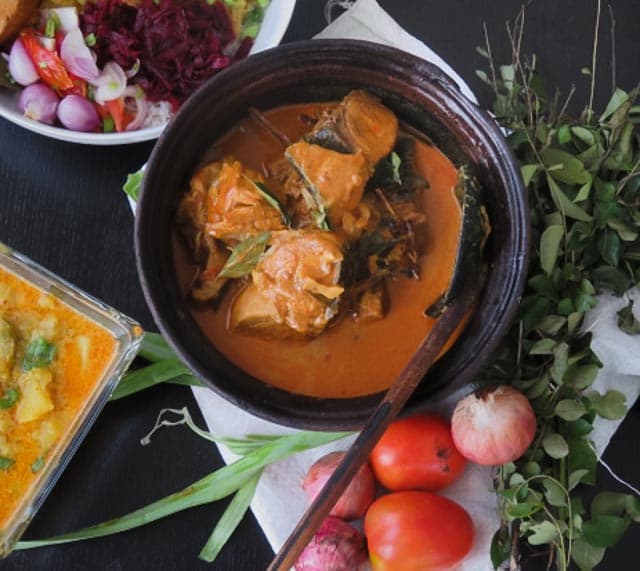 Ah, the secret joy of discovering the wonderful times you can have with your teenage friends doing things that teenagers probably shouldn't be doing. And then trying to convince your parents that you are a complete angel and would never do the things they are imagining. ;) The memories are flooding back to me, although those memories now have a lot of cobwebs on them at my age...

That's what I'm worried "doing Things teens are not supposed to be doing", no cobwebs here, crystal clear.